Check out your order now 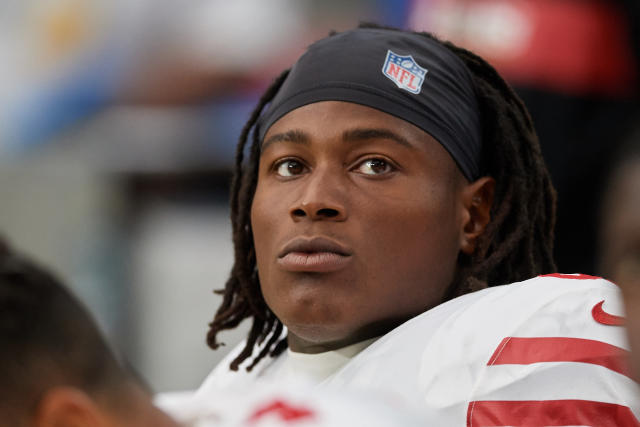 San Francisco 49ers linebacker Reuben Foster was reportedly arrested on a domestic violence charge on Saturday night in Tampa, Florida, ahead of their game against the Buccaneers on Sunday. (Robin Alam/Getty Images)

San Francisco linebacker Reuben Foster was arrested on suspicion of domestic violence battery on Saturday night at the Grand Hyatt Tampa Bay in Florida ahead of the 49ers game against the Tampa Bay Buccaneers on Sunday, according to the San Francisco Chronicle.

On Sunday morning, the 49ers announced that Foster had been cut from the team.

Foster was arrested around 9 p.m. on Saturday night, and booked at the Hillsborough County jail around 11 p.m., according to the report. No bond has yet been posted. An ambulance was also seen at the hotel earlier in the evening.

Team officials did not comment to the San Francisco Chronicle on Saturday night about the incident, and no comment was released when the team announced Foster was cut on Sunday morning.

This incident marks the latest for Foster over the past year. He served a two-game suspension to start the season for violating the NFL’s conduct and substance abuse policy after pleading no contest to a misdemeanor gun charge. Charges were dropped from a marijuana arrest during the offseason.

Foster was accused of serious domestic violence allegations from his former girlfriend this summer, though those charges were dropped after she recanted her initial statement, claiming she made up the story for money. The alleged victim initially told police Foster “dragged her by the hair, physically removed her from their house, and punched her in her head at least eight times.”

Foster has recorded 29 total tackles so far this season over six games. He has battled both a shoulder and a hamstring injury this season, and was listed as questionable for Sunday’s game.

View All My Transactions.

SAQUON BARKLEY HAS A GREAT PRO

Welcome, To Pays to Post™, Daily fresh news and photos and videos. Stay tuned and don't forget to Join our Social Network.